Building an Electron App in Windows with WSL 2 and Ubuntu

Windows Subsystem for Linux (WSL) version 2 provides a native Linux runtime right inside of Windows. It's pretty rad. I'll show you how to use that environment to build cross-platform apps with Ubuntu 20.04, Electron, and Vue.
August 2, 2020 By Matthew Rathbone
On this page

This year we released the first version of Beekeeper Studio, a cross-platform SQL editor and database manager. It is like VSCode, but for SQL. 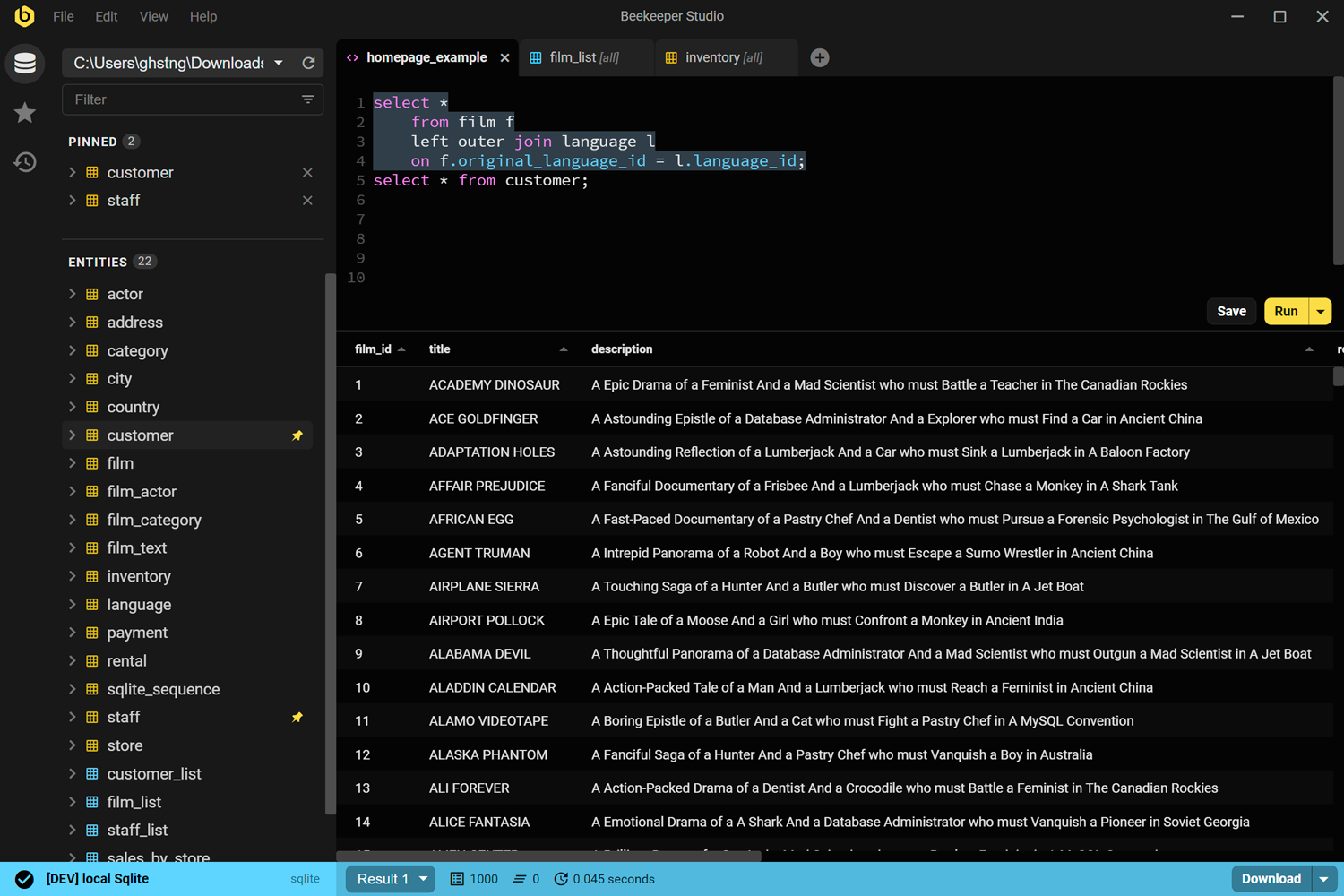 Beekeeper Studio is built with Electron, a cross-platform desktop app development framework built on top of NodeJS and Chromium.

I did most of my Beekeeper Studio development work in Ubuntu, running natively inside Windows, using the Windows Subsystem for Linux.

WSL provides an awesome tech-stack, so in this article I’ll show you how to set up your WSL2 environment for cross-platform development.

WSL, or the Windows Subsystem for Linux, is an official component of Windows 10 that runs a full build of Linux right inside of Windows.

I’ve been using WSL 2, which was officially released in the 2004 Windows update earlier this year. While WSL 1 had a slow filesystem and some package compatibility issues, WSL 2 is a full-blown Ubuntu linux install, so out of the box everything that works on Linux, works on Windows.

Once we have WSL 2 installed, we can boot it up (I also installed neofetch). 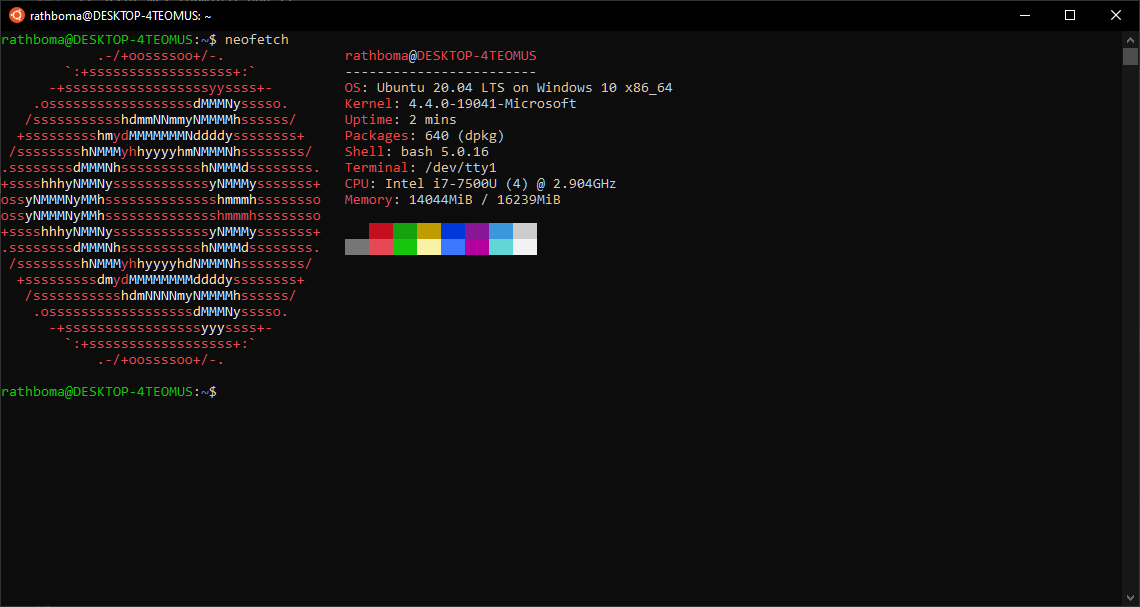 Here is the shopping list of things we need:

This is easy, we’re in Ubuntu! Lets just install a bunch of things we know we’ll need.

Then lets make a quick Electron project. I think the easiest way to make an Electron app is with Vue.js, the Vue CLI, and the Vue Cli Electron Builder plugin. Let’s go.

At this point we should be able to see our app window, but we can’t. Why not?

Out of the box, WSL 2 does not have a window manager in which to display linux apps, so we’ll have to install one, and configure WSL 2 to use it.

Hopefully in future this will be supported out-of-the box, until then, we’ll have to install our own.

What we need is called an X Server. Searching online for ‘WSL X server’ will yield a bunch of conflicting advice about which one to use. Just skip all that and install VcsXsrv. Yes I know that is a SourceForge link, just do yourself a favor and install it using Chocolatey.

Open VcsXsrv and it’ll guide you through three config screens. Here’s what to pick on each one: 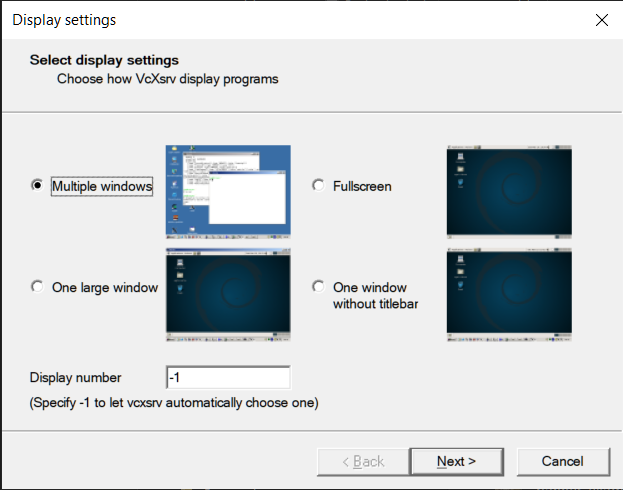 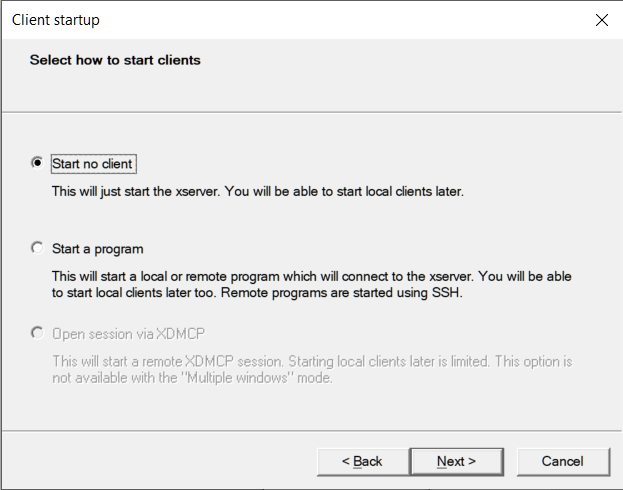 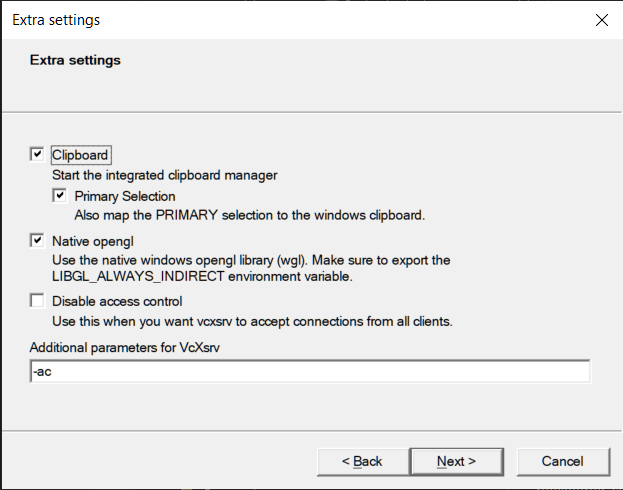 Save your config in your home directory for eash launching, then start the server. You’ll see the little X logo in your system tray. We’re ready to go.

To test that you have everything working, you can try starting an app. Lets try the basic x11 apps to make sure everything is working.

You should see the gorgeous x11 calc window. 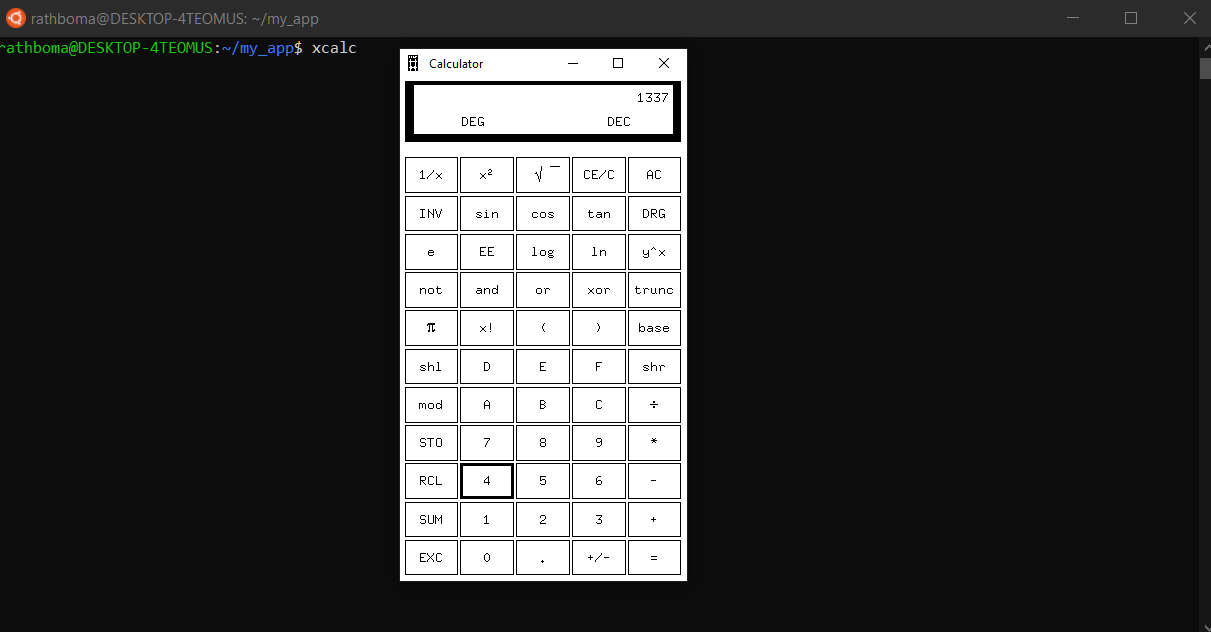 Oh wait, do you have a Hi-DPI screen and everything looks blurry? Ok you should follow this Stackoverflow post to stop the blur, or alternatively use X410 instead of vcsXsrv which supports hiDPI screens out of the box (but is a paid app). I simply disabled all dpi-scaling for vcsXsrv windows as I only have a 1080 screen.

Now we can run our electron dev server again.

You’ll see a bunch of build messages, and if you’re lucky, you should now see your Electron app in all it’s glory 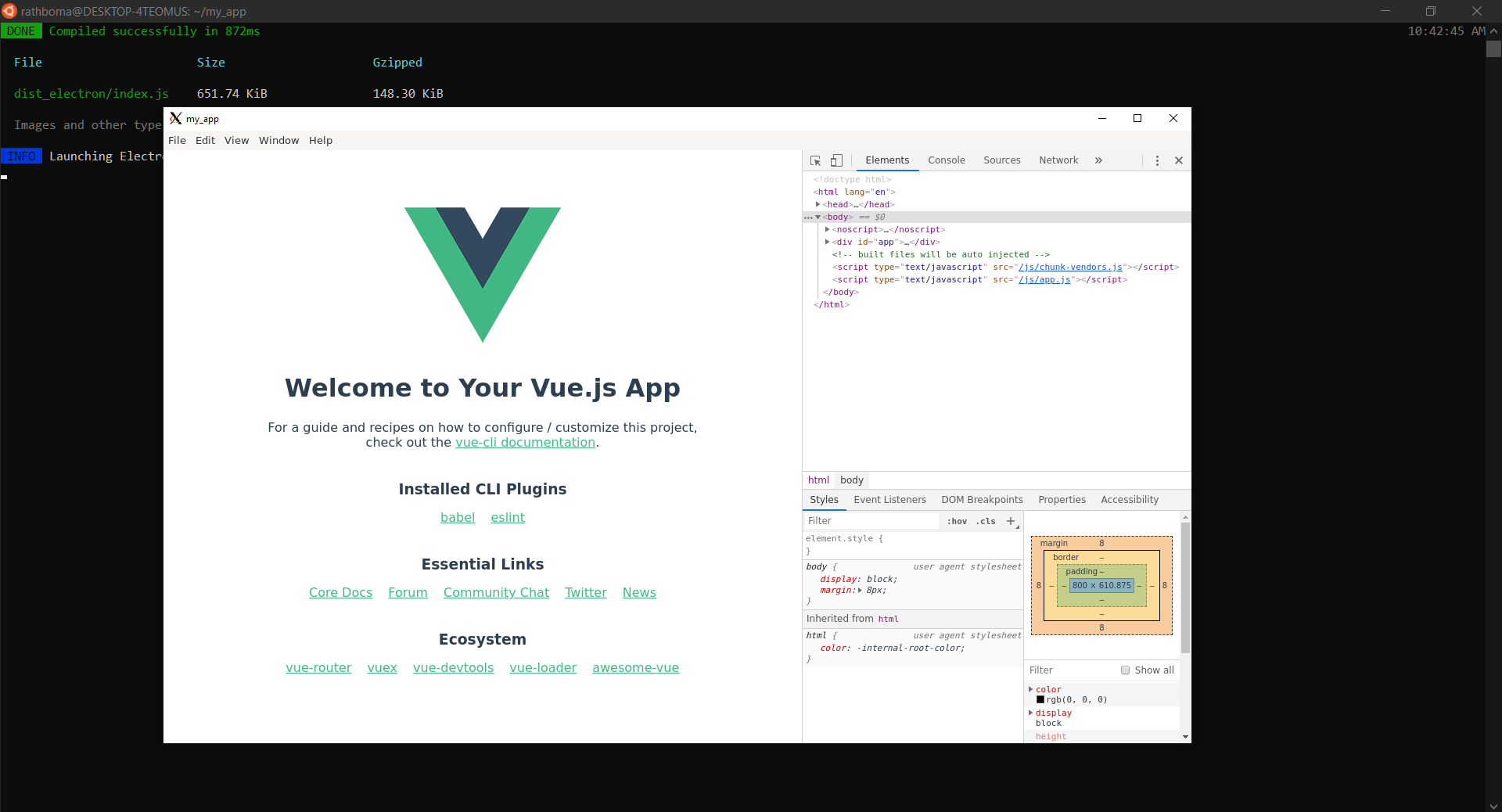 Great! Now when you make changes to your app it will auto-reload.

You can use yarn run electron:build command to create linux binaries.

5. Setting Up An Editor (And Other Tools)

You might think (like I did) that you can just use your normal Windows apps to interact with your new electron code. Well you can, sort-of, but the performance is terrible, like you’re editing code on a network drive (you are).

It’s best to think of your WSL environment as a totally separate place that simply co-exists alongside Windows. They’re like two cars side by side on the highway.

There are two ways to set up a code editor:

The only way to use whatever app you want is to run it in Linux.

Personally I commonly use Sublime Text and IntelliJ IDEA for code editing. So I installed them into the WSL environment, see for example the Linux instructions for Sublime Text.

One limitation is you have to start the editor using the terminal, for Sublime that means you execute the subl command. Another limitation is that WSL 2 does not currently support snap packages, so make sure you use deb or AppImage versions of whatever app you need.

Here’s a fun screenshot of Windows Sublime next to Linux sublime. They’re basically identical in form and function, you’d have a hard time telling the difference. 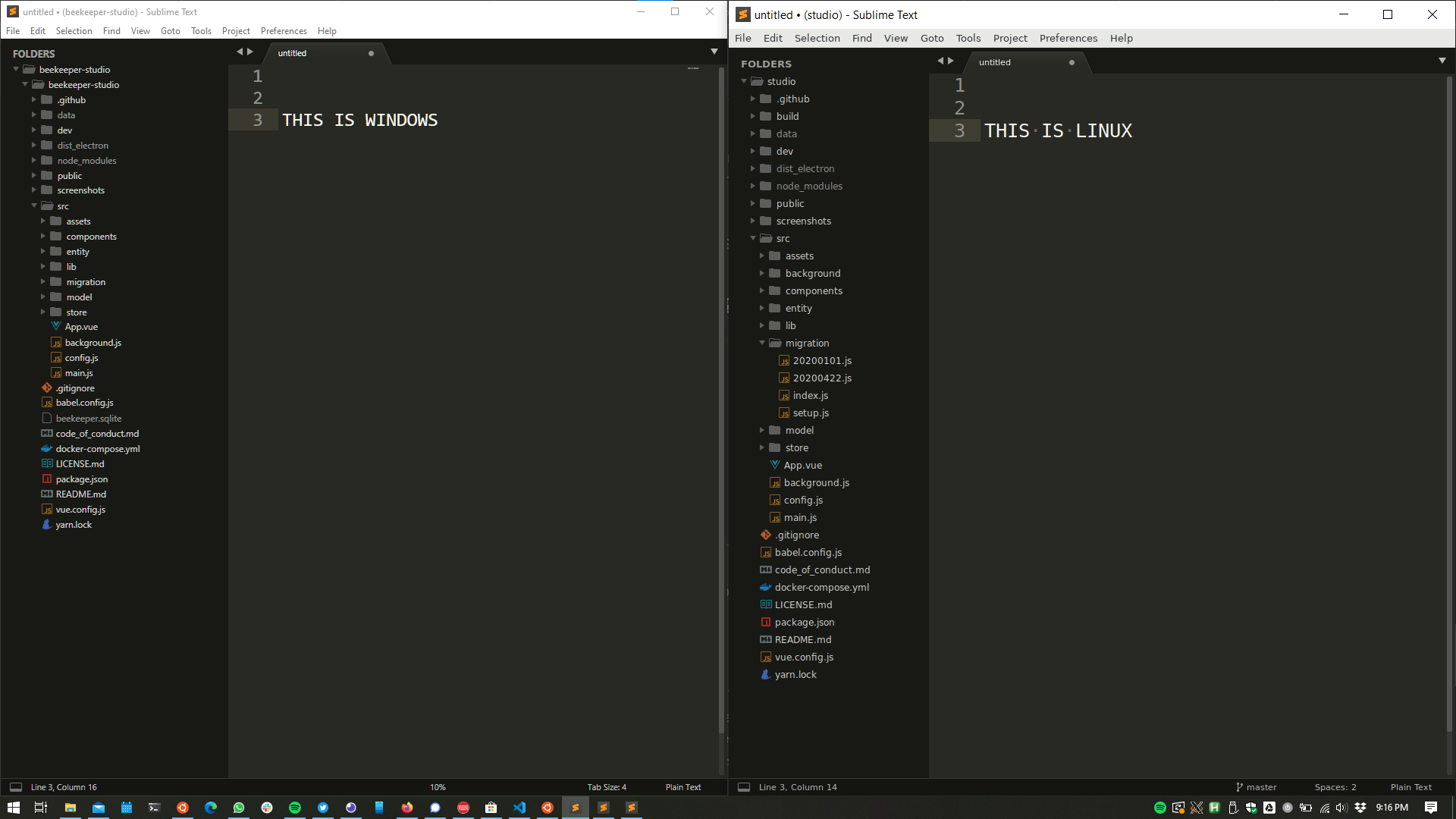 Don’t worry about the performance of these apps, IntelliJ is a heavy-weight IDE, and it works great with this set-up.

VSCode offers something unique. There’s an extension you can install for Windows-VSCode called ‘Remote - WSL’. This allows you to just use the regular Windows VSCode. Once installed, you can open a directory in your linux terminal with code ., and it will magically open in Windows VSCode.

It works great, and is a fantastic show piece of how deeper WSL2 integration could happen for other apps in the future.

Here’s me editing this blog post in VSCode running against WSL: 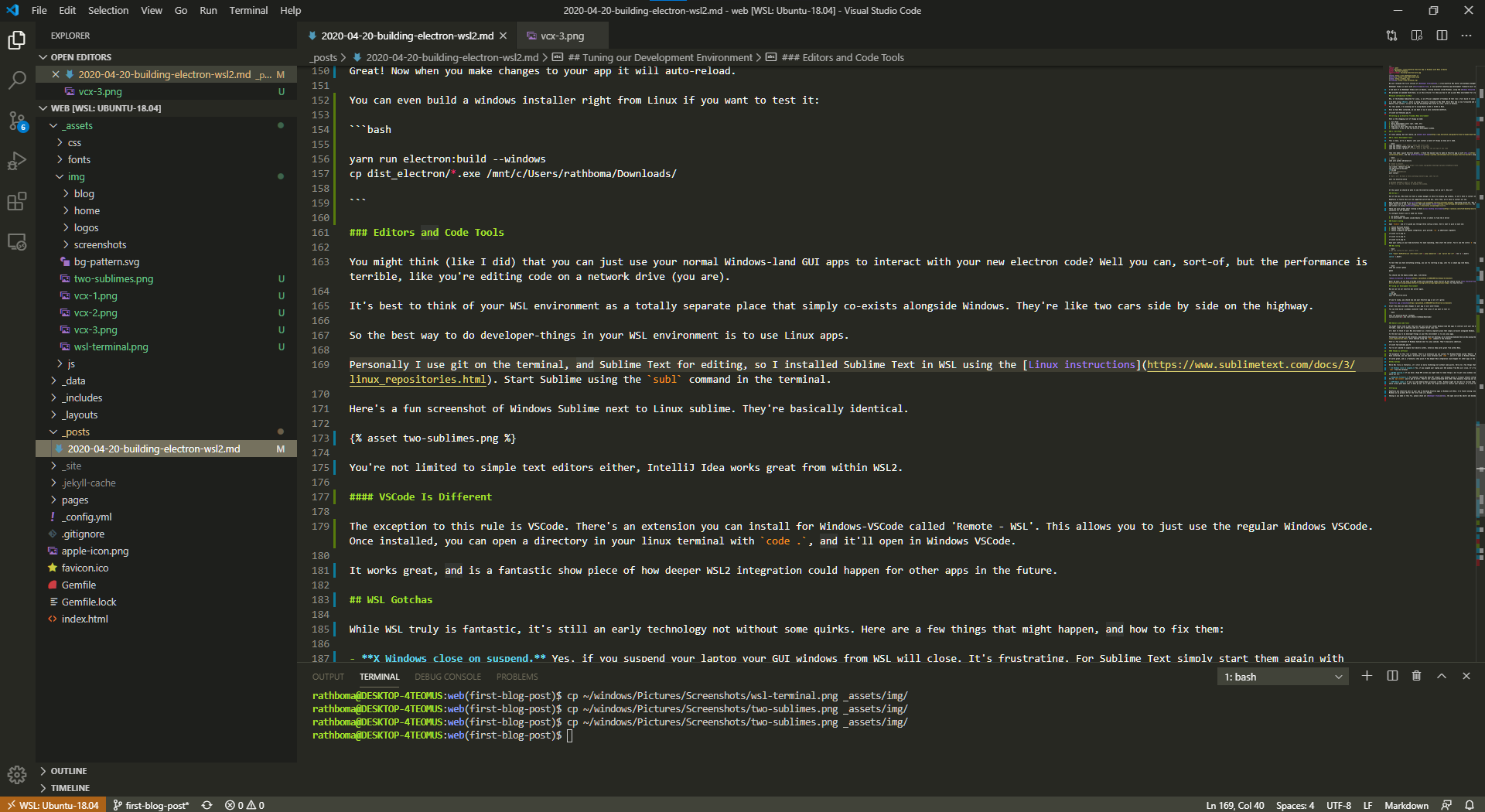 While WSL truly is fantastic, it’s still an early technology not without some quirks. Here are a few things that might happen, and how to fix them:

Hopefully you should be well on your way to building Electron apps in Windows with WSL 2. I’ve found running Ubuntu under Windows to be a dream, and has prompted my return to Windows as my primary OS for the first time in a decade.

Seeing as you made it this far, please check out Beekeeper Studio, the open source SQL editor and database manager of the future. (we hope!)